A weekend resolution and some ice cream

The kids are in grade 1 and I feel they're teenagers already -- they barely have time. Hence my resolution for every weekend is to try out one craft activity with Naisha and one easy recipe with Hrit.

Here's the craft for the week... ice cream cones out of egg cartons. 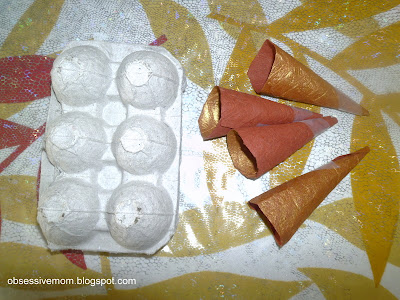 We made the cones out of handmade paper and reversed it for two different kinds of cones. Then we chopped off the tops to get an even circle at the top. 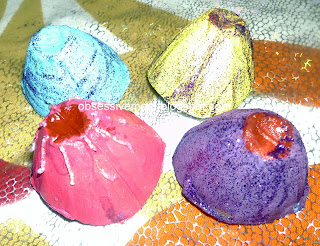 We cut out the cartons and painted them over for the ice cream scoops. Obviously we had bring out the glitter paints. Only we spilled some of the purple so we had a bit too much of shiny 'black currant' :-). "Thank God we don't have to eat them," said Naisha. Yes she's not too fond of that flavour. 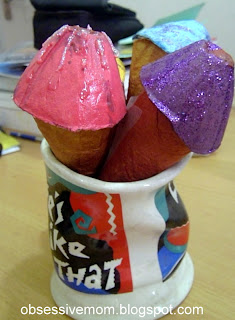 Then we stuck them onto the cones. Finally we added some pompoms for the cherry and we were done. 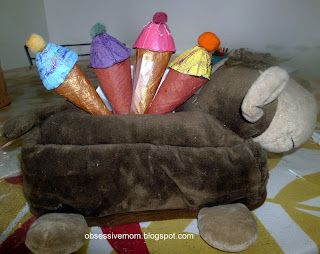 The kids are still fighting on which of their friends/teachers should get which ones. To Naisha's immense annoyance Hrit chose the pink and the purple. So I suppose he achieved his purpose.  Despite much rona dhona the issue still needs to be settled.

With Hrit I'm pretty much at a loss. We ended up boiling water and making Maggi. Talk about starting from the basics :-). I've been searching all over the Net for some kid-friendly recipes with little success. Ideas, anyone?
Edited to add: Our ice cream cones won the craftsy challeneg. Yay!